The 49 Club held the inaugural open darts tournament on Saturday 24th March 2012. Doors opened at 10am and by 10.30am the Bob Nash Suite was full of players from as far a field as Wales, Whiltshire and Cornwall all practicing hard. By 12 noon the registration closed and the draw for the 86 palyers was made. Battle commenced at 12.30pm on 8 boards.

The unfortunate players that lost in their first game were automatically entered into the 'losers' competion which would start part way through the day.

As the day unfolded the 8 board winners started to be found. Gary Grimmett, John Lakeman, Andy Aspinall, Ryan Searle, Mike Nott, Dave Burill, Julian Budd and Terry Hayes all progressed into the quater finals. The Quater finals and semi finals were keenly contested and resulted in a final between JohnLakeman and Gary Grimmett.

Action from the losers final

Mean while the 'losers' competiton had reached the final. The 49 Clubs own Chris Thomas would face Kelvin Hart in a best of 3 final. The final was a tense affair with Kelvin just getting the better of Chris to win by 2 legs to 1. Kelvin took the winners prize of £50 and Chris received £25 for runner up. 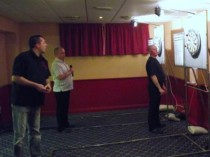 The main final followed soon after watched by a healthy contingent that had stayed on. The final was a best of 9 match and began with John Lakeman looking to make short work of obtaining the £400 first prize as he raced into a 3 - 0 lead. Gary, however, had other ideas and fought back admirably to take the next 4 games and lead 4 -3. John dug deep to tak the next game and leave it all square with one to play. The final game saw John hit a 180 to sieze the initative. After missing several shots at a double John finally hit double 5 to win the tournament as secure the £400 prize money. Gary was a valliant runner up and received the £100 second prize.

Keep up to date with goings on within the club. Search for:

Remember to "Tag yourself" when you visit, and share your photos

Want to be a member?